Seventeen years ago, on September 11, 2001, before you were born and just a week after your par

ents were married, there was an assault on our country in New York City and Washington. Assault means: a sudden attack. This assault that most people call “9/11” now, was the most terrible thing that I had ever experienced. It felt very threatening because our family was involved, and it was “close to home.

We lived on Long Island then and your Grandfather, “HP” worked in New York City. On this Monday Morning of September, 2001, he took the Long Island Railroad, walked to Midtown, and began his day at his desk on the 35th floor.  At the same time, a plane was taken over by men with weapons, and it crashed into the tallest building in NYC.  A second plane flew into the second “World Trade Center” Tower. Another plane was taken over and crashed in Pennsylvania.  Another flew into the side of the Pentagon, in Washington DC.

If you ever wondered why we stand in the long lines at the airport called “Security,” it is because of what was learned from this event. Putting all our things in a scanner, taking off shoes, emptying our pockets is what you have always done to fly on a plane.  When I was a kid, we had no seat belts in cars and babies rode on someone’s lap!  Sounds crazy! We learned the hard way to keep children safe in cars.  Airlines and governments all over the world learned how to keep passengers safe in planes after the 9/11 attack.

Your grandfather watched this attack from his office in NYC.  He and yes, maybe a million others got down out of their tall buildings and walked home through the streets of Manhattan.  He and his coworkers walked across a bridge, found a ride, and walked some more. Your Aunt and I drove through the streets in Queens until we found him standing across the street from where we parked to look at a map. No GPS in those days and the roads were closed for the Emergency helpers.

We drove home feeling grateful that we were all together, knowing that we were very, very blessed. That evening we went to the beach at Smith’s Point Park to stand with hundreds of other Long Island residents. We watched the smoke rise, told our stories, and said prayers for all the hurt people. That experience will always be with him; it will be with all of us.

When you see the sad and angry people talking about 9/11 with hateful words remember that their hearts were broken by this event.  They were very scared, and shocked that anything like that could happen right here where we live. Some people have stayed in this “fight” place, they want to continue to hate ideas, cultures and groups of people.  That won’t help us have a peaceful life or a peaceful country. And it’s hard to learn when you’re shouting.

On this 9/11, I am sitting at the 32nd floor window, looking out at the Hudson River on a foggy September 12, 2018. This building is a half block away from what used to be called “Ground Zero,” the place where these huge buildings stood.  HP and I went to a party at the restaurant at the top of the World Trade Center once.  It was so foggy we couldn’t see anything, just like today. 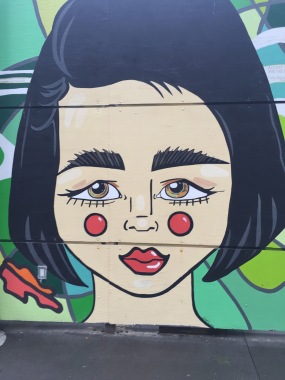 From my window, we can see the 2 powerful beams of light directed to the heavens each year to remember the people who died.  From way up here on this high floor, we can see hundreds of small shiny things flying through the beams. It looked a lot like a porch light on a warm dark night.  Turn it on, and all the bugs appear! These were too big to be bugs.  Turns out, they are migrating birds, mostly Warblers from Canada that are called to the light. They circle in the light in great loops and figure eights, hundreds at a time. They make a particular sound when they find this place. I wonder what it is they are saying to one another? Or are they calling out to us?

This year we stood with thousands of people speaking many different languages in the place where the destruction happened 17 years ago.  We listened to the bagpipes played by New York City Firemen; who lost many friends, family and coworkers.  Right around the corner, I found something different. I found it in a mural done about children that inspired me to write this letter.

Three things I would like my grandkids to know:

No matter what happens, the sun comes up and brings a new day.

#2.  Learn from whatever happens to you.

Take the emotions and use them as fuel for the fire of learning about how powerful YOU are. Help someone, be true to yourself, make a difference.

It is a not their race, religion or even their country, it is an individual that choses to harm. Individuals can make bad, sometimes vicious choices.

Despise their actions and create the opposite in your life.

the potential for the world to live in 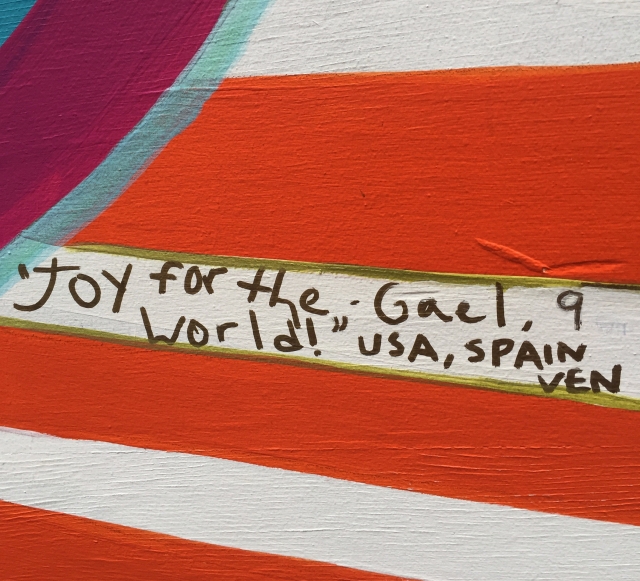 All photos, Carol Martell from the

“One World, Our Children” mural by Chinòn Maria