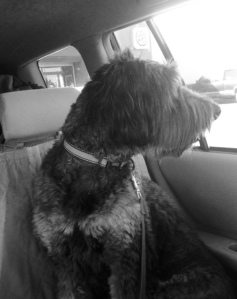 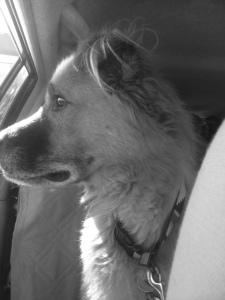 Minerva and entourage are camping in the place called Florida. A place that looks feels and smells as different from the high desert of New Mexico as a mangrove swamp is from a dusty arroyo. Minerva is also the newly claimed den to two big dogs: Bear and Mac. They are as yet, unsure of their roles and assignments on this adventure.

As a collective, these two are 165 lbs of focused intent and curiosity, both tinged with a backyard dwellers innocence. Much like a teenager, visual images spawn movement, and action happens before the intellect is engaged. We can see the canine questions floating like a comic strip bubbles above their heads.

“Are we exploring? Should we hunt? Are we supposed to protect?

“Why is the inside so small and the outside so big, and why do we keep moving?

Did you HEAR that?”

“Should we keep the other people, the dogs, the wildlife out of our space? (This is a favorite activity.)

But what is our space?”

Where’s the fence that made the boundaries so clear? For a dog it is easy to know their domain; they pee their way around the area until they have a safe bubble of familiar smell. This method is bit subtle for humans. We like fences, tall walls, bad perfume or unpredictable behaviors. The result is the same. We have marked our territory and have the right to keep it safe.

As large fierce New Mexico dogs, these two are capable of maintaining their territory with a minimum of might. Just sight of them gives pause. They have unceasingly honored the “Dog’s Contract.” They are charged with monitoring intrusions and maintaining the integrity of their personal domain; the backyard. Driving out skunks and herding Bob the cat over the fence were all in a day’s work. Intimidating marauding coyotes through the wire fence was Bear’s particular strong suit.

Our boys faced this question of a nomadic canine’s assignment at Ft. DeSoto State Park Campground. The questions that had been dogging them throughout the trip walked right through their campsite at midday, in the form of a small raccoon. Disregarding the four talking adults and two playing children barely 10 feet away, the raccoon walked past the Barbie bike, over the dog leash and attempted to climb the palm tree between the two shocked frozen dogs. A few seconds later it was a fight to the death, and the raccoon lost. The dogs worked together with precision. The raccoon didn’t suffer long. Watching your fuzzy, family foot warmer kill with speed and skill is disconcerting. There is more ancient programming running in our companions than our human-centric “sit and stay.” Eons ago, dogs in all their editions made a pact with human beings that says, “If I can sit by your fire, and eat at your feet, I will protect your babies,” …and they did.

Why was a nocturnal scavenger running through campsites at midday? Ft. De Soto is a very beautiful place. It is a place that draws a packed campsite on most weekends. It is also an island. The raccoons are so overpopulated that they have made their own rules and answered their own questions. Daytime gangs of panhandling raccoons are the norm at open beachside picnic pavilions and private campsites.

4 comments on “What are the rules?”